Denebola or beta Leo its name means the ‘Tail of the Lion’ is not only the 2nd brightest star in Leo it is also the 2nd brightest star in the zodiac. Denebola forms a distinctive triangle of stars with delta and theta, Denebola shines with a magnitude of 2.1 and is an A3 class star with a temperature of around 8,500 degrees which is hotter than our Sun. The star lies at a distance of 36 light years. 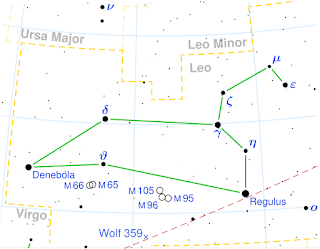 Denebola is a young star and astronomers believe that it is only around 400 million years old. This is interesting because astronomers in ancient Greece always ranked Denebola as being of the first magnitude and they said it outshone Regulus which is the brightest star in Leo today. This might be another star that has faded over a very long period of time. It is often listed as a possible variable star.