Delta Orionis or Mintaka is the western most of the three stars that form Orion’s Belt and therefore it rises or draws Orion’s belt across the sky. Mintaka which in Arabic means the ‘Belt of the Central One’ lies very close to the celestial equator. 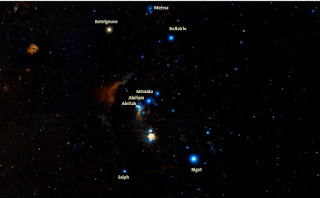 Mintaka lies around 1,200 light years away and shines with a magnitude at 2.2, its a triple star system. The star we see with our eye is an 09 blue/white giant with a surface temperature of 29,500 degrees much hotter than the Sun at only 5,800 degrees. 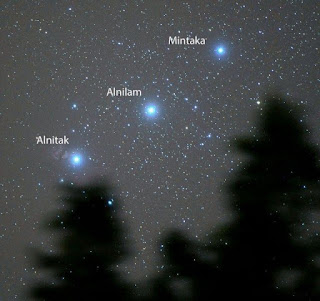 There are two other stars that complete the Mintaka system, and these are both B class stars which are hotter than the Sun, although not as hot as Mintaka.

We know that the North Star changes duie to the wobbling of the Earth over a very long period of time and due to this wobbling in 2054 Mintaka will lie exactly on the celestial equator.