Capella is the most northerly of the first magnitude stars. In brightness it is virtually equal in brightness to Vega which occupies the overhead point in summer a position that is occupied by Capella in winter. 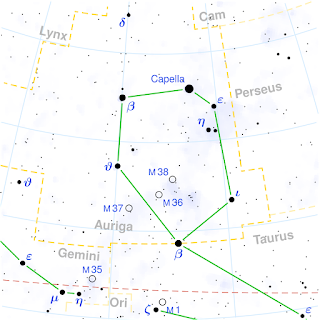 Capella means the ‘She-Goat’ and just below Capella is a triangle of three stars called the kids a very prominent feature of the winter skies and a sure sign that the star you think you are looking at really is Capella. 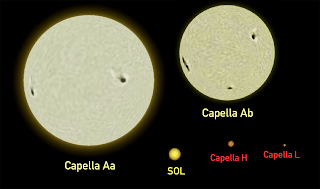 Over the years it was thought that there were five other stars in the Capella system, however astronomers have now discovered that these stars are merely line of sight stars and are not connected with Capella.

Capella also appears to be one of the brightest sources of X Rays in the sky, this is thought to come from Capella a.