Alphard is the brightest star in the constellation of Hydra the Water Snake, this constellation is the largest in the night sky. Alphard is sometimes called Cor Hydrae a term first used by Tycho Brahe (who observed the supernova of 1572) which means ‘The Hydra’s Heart’. Sadly it is always seen very low in the sky from Britain. Hydra is a spring constellation. Alphard is a K3 orange giant star with a temperature less than that of the Sun, with a magnitude of 2.0, which is the same brightness as the North Star. Alphard is 177 light years away. Alphard is usually known as the ‘Solitary One’ because there are no bright stars anywhere near it. 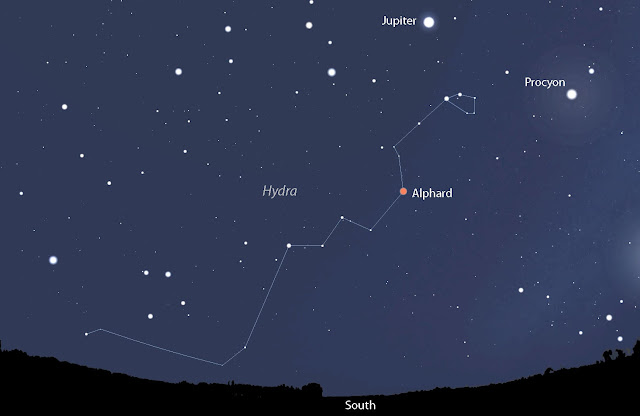 The star would be of little interest except that it is one of a class of stars of rather peculiar stars referred to as ‘Barium Stars’. Barium is a naturally occurring element and is number 56 on the periodic table. Alphard is a star that is the wrong kind of star to make barium, and when a star is not able to make it itself its get the barium from a companion star, usually this is a small white dwarf.

A white dwarf star is a star approaching the end of its life and although in size it will be very small the material that makes up the star is very compact and dense. Astronomers describe this material as degenerate material. A teaspoon of white dwarf material would weigh many tons in weight! During its life time material would pass between itself and companion star.

At the moment Alphard does not appear to have a companion star which is causing astronomers many questions. So if there is no white dwarf companion star, where did Alphard get its barium from?