Taurus the Bull
One of the most ancient constellations. Taurus has been known to people’s throughout the world since the dawn of civilisation, for the bull’s attributes of strength and fertility mean that it has always held an honoured place in ceremony and religion.
Usually only the head of the bull is depicted, its face being formed by the V shaped cluster of stars known as the Hyades. Its glinting red eye is marked by the star Aldebaran, and its long horns are tipped by the stars beta and zeta. In addition to the Hyades, Taurus contains the celebrated cluster of the Pleiades or Seven Sisters.
Alpha, Aldebaran which means the ‘follower of the Pleiades’ is a K5 giant with a temperature of 3,800’C, it is a variable star and varies between magnitude 0.7 and 0.9, Aldebaran lies 65 light years away
Beta El Nath which means the ‘butting one’, in the times of ancient Greece the star was shared by both Taurus and Auriga but since 1930 it has been permanently transferred to Taurus, its magnitude is 1.7, it is a class B7 giant with a temperature of 13,500’C and is 134 light years away.
Zeta lies 440 light years away, its a B2 giant with a temperature of 15,500’C, it has a magnitude of 3.0.
Gamma Prima Hyadum is the first of the Hyades, with a magnitude 3.6, lying 154 light years away. Gamma is a G8 giant with a temperature of 4,600’C
The Hyades is a large and bright open cluster of about 200 stars. The brightest members form a noticeable V shape, easily visible to the naked eye. In mythology the Hyades were the daughters of Atlas and Aethyra, and half sisters to the Pleiades. The Hyades are about 150 light years away.
The Pleiades also known as the seven sisters is the brightest and most famous star cluster in the sky, it is listed as M45. In mythology the seven sisters are named after a group of nymphs the daughters of Atlas and Pleione. About 7 can be seen by keen eyed people but there are about 250 stars in the group. The seven sisters are about 430 ly away.
In Taurus occurred the famous supernova that was seen from Earth in 1054, which gave rise to the Crab Nebula, M1. This is the celebrated Crab Nebula named by Lord Rosse in 1844 using the 72 in telescope. No one is sure why he thought it looked like a crab. At the centre of the nebula is a neutron star. 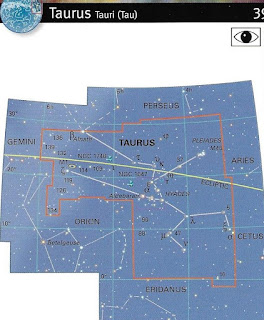