Reticulum The Net
A small and very inconspicuous constellation introduced in the 1750s by Lacaille to commemorate the instrument known as the reticle which he used for measuring star positions on his surveys of the southern skies. Its only notable feature is that it lies close to the Large Magellanic Cloud.
Alpha magnitude 3.3 its G8 giant star with a temperature 5,000’C and is 161 light years away.
Beta magnitude 3.8 is a KO star with a temperature of 4,300’C and is 97 light years away. 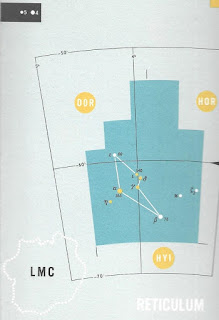