Astrognome Scrapbook The Rings of Neptune

The Rings of Neptune

On August 25th 1989 the voyager 2 space craft flew past the planet Neptune and discovered a faint ring system there. There are five faint but distinctive rings around the gas giant. They vary in width from about 5,000 km to around 100 km. They are probably made form a combination of dust and ice.
Although it was Voyager 2 that definitely discovered the rings there had been suggestions in the past that Neptune had a faint ring system. 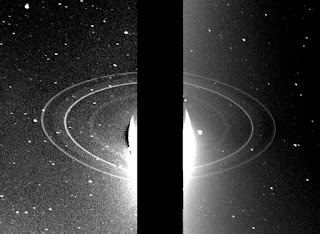 However it is the Voyager 2 visit to Neptune that claims the discovery of the rings.