On July 8th 1815 James Wigglesworth was born in Wibsey near Bradford in Yorkshire. He would go onto become a business man and astronomer and would build the biggest astronomical observatory in Scarborough, Yorkshire. 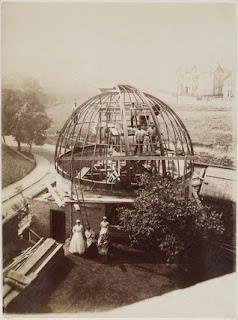 The observatory used to stand in the "V" at the corner of St James Road and Londesborough road. The observatory was built in 1884-1885. James owned the well-known astronomical firm of Thomas Cooke & Sons of York, and it was they who supplied and erected the 30' dome and the 15.5" F/15 Telescope. 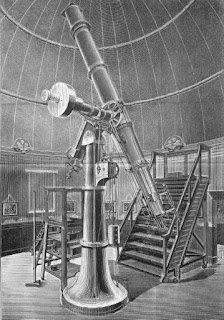 James Wigglesworth died in 1888 and the observatory was sold after his death to another amateur astronomer,  Mr Vincenzo Cerulli of Italy. 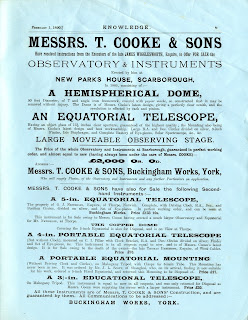 We know it was dismantled and removed from Scarborough on or about 30th June 1890. It was transported to Italy, and re-erected on a hill called Collurania, near Teramo where it still exists today. After 1917, it was formally given to the state and became officially known as the 'Osservatorio Astronomico di Collurania - Teramo V Cerulli'

The only remaining evidence that an observatory ever existed at the site is a curved buttress in the garden supporting the boundary wall that must have been part of the original observatory structure.