He was born in Sienna on June 13th 1508 , he was titular Archbishop of Padua and made observations with an instrument like a quadrant with a radius of at least 4 feet. 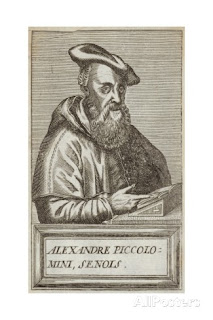 Among his many books was DE LE STELLE FISSE LIBRO UNO in 1540 containing woodcut star maps of Ptolemy’s constellations , without the mythological fugures, and the Sun being indicated by letters of the Roman alphabet.

In 1578 he advocated the reform of the calendar, this would of course be done by Pope Gregory XIII in 1582. Piccolomini  died in Sienna in 1578.