On May 4th 1989 the Magellan space mission to Venus was launched, it was an unmanned space probe with a mission to radar map the surface of Venus. The thick atmosphere means it is impossible to see the surface of the planet. 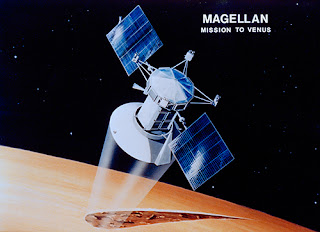 Magellan reached Venus on August 10th 1990,  during the next 4 years the probe radar mapped the Venus, its mission finished on October 13th 1994 when it entered the atmosphere of Venus and burnt up.