Gene Shoemaker  the Founder of Astrogeology

Gene Shoemaker born in Los Angeles, California on April 28th 1928 brought together geologic principles to the mapping of planets, resulting in more than 3 decades of discoveries about the planets and asteroids of the Solar System. 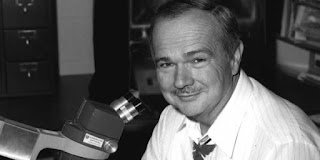 He almost single-handedly created planetary science as a discipline distinct from astronomy. He explored ancient parts of the earth for records of meteorite and comet impacts, resulting in the discovery of a number of new craters. He was the Founder of Astrogeology.

Working with his wife Carolyn and David Levy he discovered Comet Shoemaker-Levy 9 which in 1994 crashed into Jupiter.