David Rittenhouse was born in Philadelphia on April 8th 1732; he would go on to become an important  American astronomer, inventor, clockmaker, mathematician, surveyor and public official. Rittenhouse was a member of the American Philosophical Society and the first director of the United States Mint. 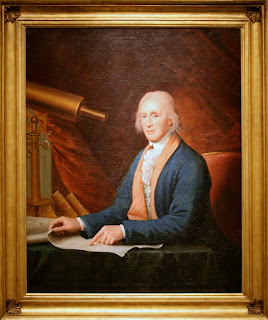 He was one of the first to build a telescope in the United States. His telescope, used spiders web to form the cross hair wire or reticule. He used this telescope to observe and record part of the transit of Venus across the sun on June 3, 1769. In 1781 Rittenhouse became the first American to sight the planet Uranus.

In 1784 Rittenhouse, and surveyor Andrew Ellicott and their team completed the unfinished survey of the Mason–Dixon line to the southwest corner of Pennsylvania, 5 degrees of longitude from the Delaware River.