The Pioneer 4 mission which was launched on March 3rd 1959 was the second of two early attempts by the United States to send a spacecraft to the moon. The probe was primarily designed to photograph the Moon. Pioneer 4 did in fact fly past the moon, but at a much farther distance than planned, because of the trajectory error, the camera sensor failed to trigger. 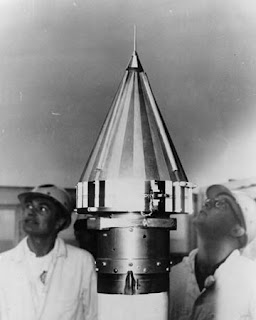 Pioneer 4 then went into orbit around the Sun becoming the first spacecraft to do so, contact was lost on March 6, 1959.
Posted by Astrognome at 05:06