Frost Fair on the river Thames

On January 19th 1684 the diarist John Evelyn visited the Frost Fair  being held on the river Thames. This was at the time referred to as the ‘Little ice Age’ because it was so cold. The Thames was frozen to a depth of several feet. 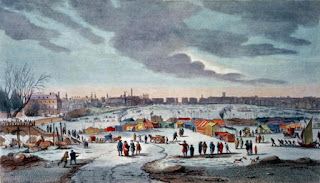 In late January 1684 even King Charles II spent a night on the Thames. On the frozen river, Oxen were roasted all sorts of goods were sold plus there were even horse races on the frozen river.


This particular frost fair continued until early February.
Posted by Astrognome at 08:46