The first major meteor shower of the year, The Quadrantids appear to come from the now defunct constellation of Quadrans the Quadrant. This is an area between Bootes, Draco and Hercules. 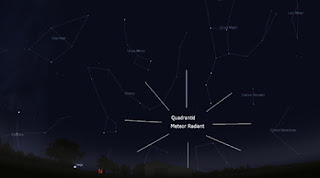 The best time to try to observe the Quadrantids is predicted to be between 10.00pm on the night of the 3rd January until about 3.00 am on the morning of January 4th.
Posted by Astrognome at 07:28