Cannon was the eldest daughter of Wilson Cannon, a Delaware state senator, and Mary Jump. She studied physics and astronomy at Wellesley College, graduating in 1884. In 1894 she returned to Wellesley for a year of advanced study in astronomy, and in 1895 she enrolled at Radcliffe in order to continue her studies under Edward C. Pickering, who was director of the Harvard College Observatory.

In 1896 Cannon was named an assistant at the Harvard Observatory, becoming one of a group known as “Pickering’s Women.” There, joining Williamina P.S. Fleming and Antonia Maury, she devoted her energies to Pickering’s ambitious project, begun in 1885, of recording, classifying, and cataloging the spectra of all stars down to those of the ninth magnitude. Fleming had initially classified stellar spectra by letter in alphabetic sequence from A to Q, mainly according to the strength of their hydrogen spectral lines. Maury created a new scheme with 22 groups from I to XXII and further added three subdivisions based on the sharpness of the spectral lines. She also placed Fleming’s B stars before the A stars. 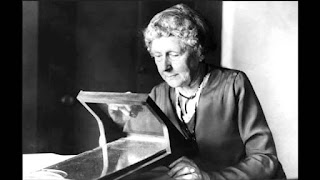 In a catalog of 1,122 stars published in 1901, Cannon drastically simplified Fleming’s scheme to the classes O, B, A, F, G, K, and M, and she retained P for planetary nebula and Q for unusual stars. She also added numerical divisions, further dividing each class into 10 steps from 0 to 9. It was soon realized that Cannon’s scheme actually was classifying stars according to their temperature, and her spectral classifications were universally adopted. She eventually obtained and classified spectra for more than 225,000 stars. Her work was published in nine volumes as the Henry Draper Catalogue (1918–24). 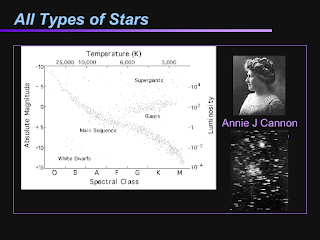 In 1911 Cannon succeeded Fleming as curator of astronomical photographs at the observatory. After 1924 she extended her work, cataloging tens of thousands of additional stars down to the 11th magnitude for the two-volume Henry Draper Extension (1925, 1949). In the course of her work, Cannon also discovered some 300 variable stars and 5 novae.

Among the numerous honours and awards accorded her were the first honorary doctorate from the University of Oxford to be awarded to a woman (1925) and the Henry Draper Medal of the National Academy of Sciences in 1931. She was also the first woman to become an officer in the American Astronomical Society. In 1933 she established that organization’s Annie Jump Cannon Award, which is given to a North American female astronomer (within five years of receiving a doctorate) for her distinguished contribution to astronomy. It was only in 1938 that she was appointed to the Harvard faculty, when she was named William Cranch Bond Professor of Astronomy. Cannon officially retired from the observatory in 1940 but carried on research until her death the next year.
Posted by Astrognome at 09:52