Telescope lost in storm at Harrogate

On Monday last this most fashionable watering place was visited by the most destructive storm ever remembered by the oldest inhabitant. About two o’clock in the morning the wind being at that time in the south-west commenced blowing a perfect hurricane and continued up to noon.

The churches of high and low Harrogate, the Methodist Chapel and the three promenade room have all suffered amidst the general devastation.

A very valuable telescope was blown from the top of the observatory, and has not yet been found.

Posted by Astrognome at 01:26 No comments:

A Cooke for sale in Leeds

Posted by Astrognome at 01:12 No comments:

A comet made its appearance here last evening at 35 minutes past six o'clock, within two or three degrees of Algenib, the last star in the wing of Pegasus. It is 32 degrees to the east of the sun, and sets with Saturn soon after eight o'clock, about W. N. W. but is 18.5 degrees to the north of that planet. Its small light nucleus was surrounded by a diffused coma, three fourths of a degree in diameter by the sextant, and its perpendicular tail, was nearly 4 degrees in length when the coruscations were most vivid, through the upper part of which a small star of the sixth magnitude was perceived by the help of a telescope. This is unquestionably the same comet that Seigneur Pons, Astronomer of the Ductless of Lucca, discovered in the constellation Pegasus, in the evening of thee 21st ult., but which, to our knowledge, has not yet been seen by the English astronomers.

The new comet has been seen at Wakefield, and also at Bingley. Its nucleus is exceedingly brilliant; its tail, which is about four degrees in length, appears larger at the beginning than at the extremity. Its apparent motion is very slow; it has barely proceeded two degrees and a half in right ascension and declension from the 21st of January last, to the 22nd of Feb. It sets about eight o'clock in the evening. The most favourable time for seeing it is, therefore, from six to half-past seven o'clock. It is in the West and still in the constellation of Pegasus. We have not yet heard of its having been observed at Leeds.

This was comet Nicolett-Pons (J N Nicolett Royal Observatory Paris and J L Pons Marlia Italy) was discovered on January 21st 1821 near gamma Pegasus, it was at its brightest on March 6th when it was reported at between magnitude 3 to 4.

Posted by Astrognome at 03:56 No comments:

The telescope left on the train

Among the curious things connected with the business of railways are the variety and strange character of the unclaimed property which falls in to the hands of the railways as carriers of passengers and goods.

One person has left a very superior astronomical telescope in mahogany case complete, and it is now unclaimed. Where is its owner and what has he been doing to render himself unconscious of the loss he has sustained? Or has he abandoned the study of astronomy for the more prosaic and common occupations of the earth?

Posted by Astrognome at 01:41 No comments:

A Cooke in Glasgow

A Cooke in Glasgow

John Dansken who was born in Glasgow in 1836 was by profession a surveyor and an enthusiastic amateur astronomer who built an observatory at his home in Patrickhill, Glasgow which included a 5 inch telescope by Thomas Cooke of York, there was also a larger 13 inch reflector made by D Hunter of Lanark.

A number of smaller instruments were also housed there including telescopes by Wray and Dollond. |He also had one of the finest astronomical libraries in the West of Scotland. John Dansken died in 1905.

Posted by Astrognome at 02:28 No comments:

Mr Goodacre proposes to deliverer a course of FOUR LECTURES on ASTRONOMY at the THEATRE at PONTEFRACT on Friday August 23rd, Monday, the 26th, Wednesday the 28th and Friday 30th at 7.00 o’clock each evening precisely. An introductory lecture comprising the history of astronomical research from the earliest records to the present time, will be delivered on Wednesday 21st, at the same hour. This lecture will be gratis to subscribers and the money paid for admission by non subscribers, will be given without any deduction whatever to the funds of the Pontefract Dispensary. 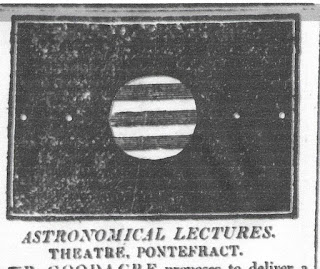 Mr Goodacre is very happy again to visit the West Riding of Yorkshire and he respectfully informs the friends of the Science of the Universe that he proposes to deliver his lecture in every town in this interesting district where accommodation, suitable for the reception of his extensive apparatus, can be obtained, not doubting but that the same liberal patronage, which was last autumn at Bradford, Leeds and Wakefield conferred on his first efforts as a public lecturer, will be again bestowed on his exertions.

Posted by Astrognome at 01:43 No comments:

Many of your reader may be interested to know that the planet Mercury was seen just over the horizon at 6.20 this (Thursday) evening here. He was easily visible to the naked eye, yours etc STAR-GAZER

To the Editor of the Yorkshire Post, Sir- If was STAR GAZER (of Scarborough) himself who saw the planet Mercury at 6.20 Thursday evening last, then I congratulate him upon the performance of the feat. If it was not STAR GAZER then the letter is not quite clear the point—then I congratulate theother fellow." The sun had been 32 minutes, and the planet set about of three quarters of an hour after being glimpsed.

It is enough to make that astronomic giant. Copernicus. turn in his grave. Great astronomer as he was he never had the satisfaction—so the tradition says- of seeing the sparkling planet under any circumstances whatever. But then, did not live at Scarborough.— Yours, etc.. J H ELGIE F .R.A.S. Leeds.

Sir.—Mr. Elgie doubts my having seen Mercury last Thursday at 6.30. If it had been an ordinary occurrence I should not have called attention to it. Let Mr. Elgie imagine the conditions a perfectly clear western horizon, a strong north-west gale having been blowing all day. An observer on the watch for the planet and looking in the right place, a sweep of open country before him.

Jupiter was well visible of course Aldebaran just visible. A and B Arietts not yet so and Mars not yet so. if Iremember rightly.

Can Mr. Elgie name a star in Pisces that I could possibly have mistaken for the planet?

Copernicus did not in Scarborough, quite true. If he had hie would have seen Mercury many times, for I saw him at least half a dozen times last year from the same spot, and you can't mistake his ruddy flash.

I think Sir Robert Ball says first magnitude stars may be seen with the Sun 5 degrees below the horizon. On this occasion I roughly calculate the Sun would be 6 degrees below and Mercury about 7 degrees above. On point, however, not profess to speak with precision. Yours, etc.. STAR-GAZER. Scarborough. March 12.

I can understand "Star-Gazar," of Scarborough having seen it on Thursday evening last if he had anything of a clear night. After viewing this some what difficult object in the telescope, I read off right and declination circles the telescope and found they corresponded with those given in the Nautical Almanac, allowing a little, of course, for the planet's motion from the epoch, for which the N.A. times are given—which proves that Mercury was the object seen.—Yours, etc..

Posted by Astrognome at 09:02 No comments: